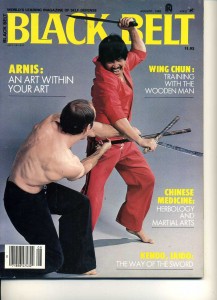 The origins of arnis are difficult to trace, primarily because there are nearly as many styles of Filipino stick fighting as their are islands in the Philippine archipelago- more than 7,000! The races that settled in these islands came from India, Southeast Asia, China and Indonesia. These diverse races and cultures blended their heritages over the centuries, producing a common method for employing sharp swords, daggers and fire-hardened sticks in combat. These highly sophisticated fighting styles have grown in popularity in the international martial arts community.

One of the earliest known forms was called tjakalele, (Indonesian fencing). Kali is another term familiar to stick fighters around the world today. When the Philippines were invaded by the Spanish, the invaders required guns to subdue their fierce opponents. The deadly fighting skills of Filipino warriors nearly overwhelmed them, and they dubbed the native stick style escrima (skirmish). Escrima was subsequently outlawed, but the techniques did not disappear. They were preserved in secret, sometimes under the very noses of the conquerors, in the form of dances or mock battles staged in religious plays known as moromoro. These plays featured Filipinos, sometimes costumed as Spanish soldiers wearing arnes, the harnesses worn during medieval times for armor. The blade fighting forms and footwork were identical to those used in escrima.

The word arnes soon became corrupted to arnis, and the name stuck. Historically, arnis incorporated three related methods: espada y daga (sword and dagger), which employs a long blade and a short dagger; solo baston (single stick) ; and sinawali (to weave), which uses two sticks of equal length, twirled in “weaving” fashion for blocking and striking (the term derives from sinawali, the bamboo matting woven in the Philippines).

When Remy Amador Presas first traveled his country, he took what he considered to be the most effective principles of each island style and combined them with his own knowledge of other martial arts, such as karate, judo and kenpo. Modern Arnis, as Professor terms his system, incorporates empty hand moves based upon the same motions used in solo baston and sinawali. Unlike kali, his system also uses low kicks and takedowns for a more well-rounded approach. Professor also insisted on modernizing a particular training aspect traditional in arnis: that of hitting your opponent’s hand or arm instead of his stick – a painful practice that was tolerated because the rattan canes used in arnis were considered sacred. Presas decided that hitting the stick was just as good a practice method and would obviously discourage far fewer students of arnis, preventing many painful injuries.

Professor does not merely combine techniques, he encourages the individual student to adapt arnis principles to his own feel for each technique. The method should suit the person and not the other way around. This is known simply as using “the flow.” The flow is Professor’s universal term for defining the comfortable place where the movements of arnis and the individual human body meet for maximum effectiveness; body and weapon blend to achieve the most natural fighting style based on an individual’s needs and attitudes.

[singlepic id=171 w=320 h=240 float=left]“Arnis makes many martial artists discover new things about their own style,” says Professor. “They recognize the beauty of arnis because it blends naturally the best movements from many arts. Most of my students continue to study their own styles-they just use arnis to supplement their understanding.” For his seminars, Professor has further simplified some of his teaching in order to give novices a tangible amount of self-defense skill through specific drills. Sinawali, for instance, is practiced first with the hands in “patty cake” fashion, then the sticks are picked up and the student repeats these motions. Presas demonstrates how these weaving motions can be translated into empty hand movements for blocking, punching and takedowns. He has designated 12 important angles of attack on the human body, and 12 basic ways of dealing with each angle. There are also many disarming techniques, and the variations and improvisational capabilities implied are endless.

[singlepic id=172 w=320 h=240 float=right]Arnis is a growing art, expanding in this country rapidly. Arnis tends to transcend stylistic distinctions, and discovery seems to be a primary benefit from the study of Modern Arnis, especially under the methods of Professor Presas.