Academy of Soo Do Thai 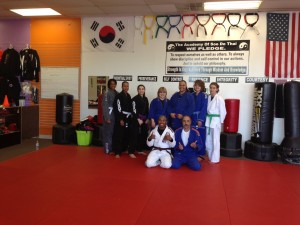 Located in Hazel Park, Michigan the Academy Of Soo Do Thai offers professional instruction in a wide variety of disciplines including traditional Soo Do Thai, Tae Kwon Do, Tang Soo Do, Muay Thai Kickboxing, MMA, and Brazilian Jiu-Jitsu. Chief Instructor Isaiah Gathings is a Brown Belt in Brazilian Jiu-Jitsu and is a Jean Jacques Machado Affiliate in the State of Michigan.

As a member of the Jean Jacques Machado Affiliate, one of the greatest benefits is to feel welcomed when visiting other affiliate schools. The friendship and respect is mutual. Truly the ego is defeated and it stays outside the studio or academy. Master Jean Jacques Machado if you happen to read this post, I want to say thank you for the spirit of camaraderie. I want to personally thank Master Isaiah Gathing for the great time we had at his studio and the awesome team of students. This is a new path to embark on for myself (Master Angel) as well as for the family. With my wife Julie, daughters Jasper and Lily, and the student body who will be following we are moving in this direction together. We “referring to Angel Karate” have been teaching BJJ since the late 1990’s. My son and member students were the beneficiaries of the art of BJJ at Angel’s Karate. I have not been able to fully participate in BJJ because of an injury suffered during my TaeKwonDo  5th degree blackbelt test in 1995. Mrs. Julie and I did earn our blue belts with Black Belt Ryan Fiorenzi, a man of good character. My lovely wife Julie has studied the philosophies and the beliefs of the technicians of BBJ saw in Master Jean Jacques Machado the personification of a truth which cannot be denied.  We want to pursue the growth of BBJ knowledge. I look back to the photos of students who once trained in the BBJ art in our school and they are now brown belts , some getting ready for black belt. Mrs. Julie and I agree it is time to rebuild and we have chosen to rebuild with Master Jean Jacque Machado. The foundation for the BJJ in our school was started with my son and confirmed by John Machado in the late 1998’s where he awarded at Angel’s Karate seven blue belts. I had the honor to spent time with and talked with John Machado. We drove with him from Michigan to Canada. This was an opportunity to see his character in action. The name Machado stands for Integrity. My wife and I have joined the Jean Jacques Machado Affiliation to agree with its principles of Integrity, Loyalty, Ethics, Values and Brotherhood.

Affiliation in the hope of Integrity, loyalty, Ethics, Values and brotherhood.